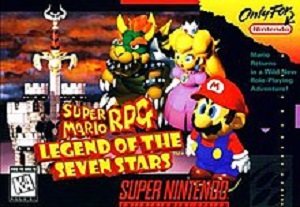 We also have PRO Action replay and game genie codes.

9999 Attack Trick – After you acquire Geno, put him in your party. After he learn the move Geno Whirl, enter battle. Use Geno Whirl and a tornado like wind will come onto the screen. Push Y right before it leaves the screen for 9999 attack points.  You will hear a crackling sound if you did it right. This does not work on all enemies (ie bosses).

How To Get Infinite Money – When you are on the path going towards Rosa town, get to the section where all of the ShyGuys are standing on top of the treasure boxes. Go to the bottom right side of the screen to the exit. Hit the box next to the door and get a few coins (but do not empty it, leave some in) then go through the exit. As soon as you go through the exit, go back through and hit the box more times (still don’t empty it). Then just repeat this until you have a many coins as you want, it won’t go empty!

Hidden command – Open the menu screen (by pressing X), then press Down, Up, Right, Left, Select, Start, Select, Start, B. Kinopio (Toad) pops up and asks to see your status, giving you little tips and tricks.

Easy Level Up’s – Look for a place where a star is next to a save point. Save, then get the star, level up as many times as you can. Then die (in game) and you will still have your levels, aswell as be able to use the star again

2D Mario from Super Mario Bros. 1 – One time only in the game you can change into a 2D Mario walking around on a 3D landscape. It is prety cool. The image turns sideways when you tern diagonal. In booster tower, I think it’s right after the room with a switch that opens a pasage of booster pass. There is a large curtain near the exit. Go in the right side and coming out the right side wont do it but going in the right and coming out the left causes the transformation.