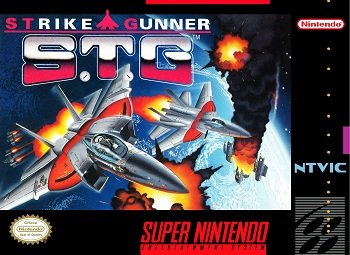 Strike Gunner STG is a two-player vertical scrolling shoot-em-up game by Tecmo. The game was originally released in the arcades in 1991 and was then ported to the Super Nintendo in 1992. I had never heard of this game until recently and I was surprised how good this game is.

In the game, Earth has been invaded by aliens and it’s up to you to save Earth using the aliens’ technology against them. There are eight stages in the game where you have to battle helicopters, gun turrets, tanks, space ships, and an end-of-level boss.

At certain parts of the game, a stealth bomber will airdrop power-ups for you which will make your weapon more powerful or give you a speed boost. If you are playing with two players you can merge your ship into one larger ship which will produce more damage which is useful for boss battles.

I like the way at the start of every level you have to select a special weapon, you can choose any 1 of 15 weapons to use in that level. But be careful the more you use the special weapon the more your special power bar will decrease.

Overall I would rate this game 8 out of 10, I think the graphics are great with an amazing animated intro, there are some awesome tunes and sound effects and I feel this is a game you can keep playing over and over again.

The Super Nintendo had many great titles and one of the largest game libraries in console history. Due to this, there are many great games that you have probably never heard of. I am on a mission to uncover as many hidden gems as possible.