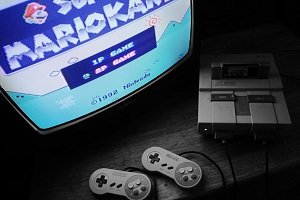 Competitive gaming has existed since the 1970s. In 1972, Stanford Universty in California held a competition for Spacewar, a space combat game, offering the winner of the grand prize with a subscription to Rolling Stone. In 1980, Atari went even bigger when it held the Space Invaders Championship which drew in more than 10,000 participants from across the United States, all eager to blast virtual aliens in the face.

The advent of online video games, which used the internet as the basis for competitive multiplayer tournaments, also shaped the esports industry as we know it. As many as 16 players could play games like Netrek, a directional shooter and real-time strategy title.

A quick look at the history makes it clear that esports didn’t just spring up out of the blue in 2018. So with esports’ long history, it begs the question: can retro games be part of the esports revolution?

To say that we’ve come a long way from the esports tournaments held in the pre-2000s is a polite understatement. Atari, which ran those Space Invaders tournaments, has since crumbled in the modern era and filed for bankruptcy in 2013, no longer the great name in gaming that it once was. Nintendo once held the Nintendo World Championships (including the SNES-focused Nintendo PowerFest ’94), which toured across the United States. However, the company has since pivoted and is opting for tournaments that take place alongside other events, such as its Super Smash Bros. Nintendo Switch Invitational and the Splatoon 2 World Championship which take place at E3 2018. Nintendo’s modern tournaments also focus on newer games, rather than retro icons.

There are some smaller-scale retro gaming esports tournaments, though, such as the Classic Gaming Championships which took place in 2014 and 2015 and featured different disciplines including first-person shooter, racing, and sports. There’s also the Retro World Series which holds events at different gaming expos and includes games such as Mortal Kombat 2 and Balloon Fight.

There is huge potential surrounding these aforementioned tournaments and they could potentially reach the same highs as ESL Pro League, The International, IEM Katowice and the other major esports tournaments listed by Betway. The mainstream tournaments listed there focus on modern games such as popular shooter Counter-Strike: Global Offensive, MOBA League of Legends, and basketball sim NBA 2K, but retro tournaments could learn some key lessons from them.

What Can Retro Gaming Tournaments Do to Reach the Mainstream?

With the release of consoles such as the SNES Mini edition, which is a smaller version of the SNES that contains a select amount of games, or the upcoming Sega Mega Drive mini, these retro tournaments could capitalize on that interest. If the release of other Mini editions is anything to go by, such as the SNES Mini which has sold more than four million units, retailers will quickly sell out of these retro console re-releases. It would make sense for these tournaments to partner with retailers so that their customers could be competitors. Stores could provide the venue for these tournaments, benefiting from the increased foot traffic of interested spectators and players.

By partnering with stores – especially those that are part of larger retail chains – these tournaments could also go global. One of the main reasons that modern esports tournaments have been able to grow far more than their original, retro counterparts is that they’ve been able to reach a wider audience through the use of streams and simply by taking place in several countries.

Arguably, retro tournaments will also want to consider offering higher prize pools. Where major corporate sponsors are not available, they could follow the lead of Valve with the record-breaking prize pool of the Dota 2 International, worth more than $23,325,687, which is partly comprised of fan contributions.

Retro gaming is experiencing a resurgence in popularity at the moment, thanks to the re-release of those retro consoles and because of a wave of nostalgia thanks to speedruns and streams of classic titles. Many esports fans will be keen to see retro titles embrace their competitive history.