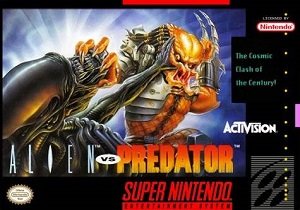 Alien vs. Predator is a 1993 side scrolling fighting game for the Super Nintendo Entertainment System. It was the first Alien vs. Predator game at the time of its released. The game was Published by Activision and developed by Jorudan Co. 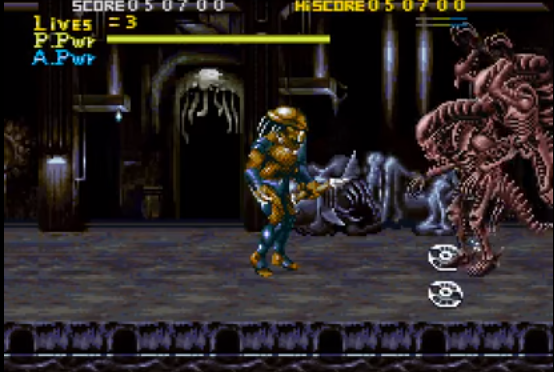 Players play as the predator in this side scrolling fighting game and must fight their way through a series of missions. The predator has a wide range of abilities like sliding, firing bolts, jumping and attacking. Some of the aliens killed in the game leave power up which include trophy skulls and health. Some of the levels have a boss fight at the end. 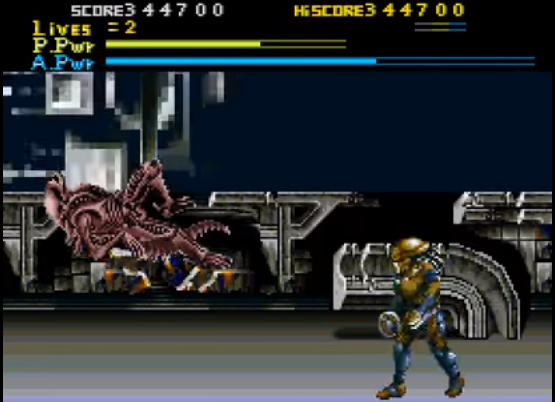 Adapted from the Alien vs. Predator comic book series, mankind has colonized plenty of planets during the 25th century and on one of those many planets, strange creatures were discovered on the planet New Shanghai. These creatures cause massive chaos everywhere they went and New Shanghai sends a distress call to the other planets in the galaxy asking for help however, there is a cloaked ship that belongs to the predators that intercepts the distress call. The predators on the ship look at the strange creatures attacking New Shanghai as trophies and decide to attack them. Players play as a predator in this game.

Alien vs. Predator (SNES) Q and A

Question : What Are The Game Controls For Alien vs. Predator?
Answer : Here They Are.

If you plan to play this game it might help to learn the game controls first. If any of these controls for Alien vs. Predator are incorrect please let us know by posting a comment below

Question : How Long Does It Take To Complete Alien vs. Predator On The SNES?
Answer : If you plan to play this game you will be interested to know how long this game will take to complete and how hard people rate this game. The below stats were taken from howlongtobeat.com

Question : Is It Illegal To Download and Play a ROM of Alien vs. Predator ?
Answer : Yes it is illegal.  Nintendo have posted the following on there website “whether you have possession of a Nintendo ROM for a limited amount of time, i.e. 24 hours, it is illegal to download and play a Nintendo ROM from the Internet”  which makes it clear that downloading ROMS is completely illegal.  A lot of people say this is a grey area, Some say as long as you own Alien vs. Predator on the SNES you can download and play the ROM as a backup to the physical media, this is not true.  Nintendo see ROMS as a threat to date to the intellectual property rights of video game developers.