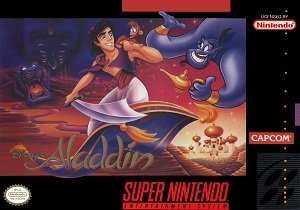 Aladdin is a 1993 side scrolling platformer game for the Super Nintendo Entertainment System. The game is based on the 1993 Disney film of the same name and was developed by Capcom. Players play as Aladdin and follow his adventures with his money Aku as they set out to defeat the evil sorcerer Jafar. 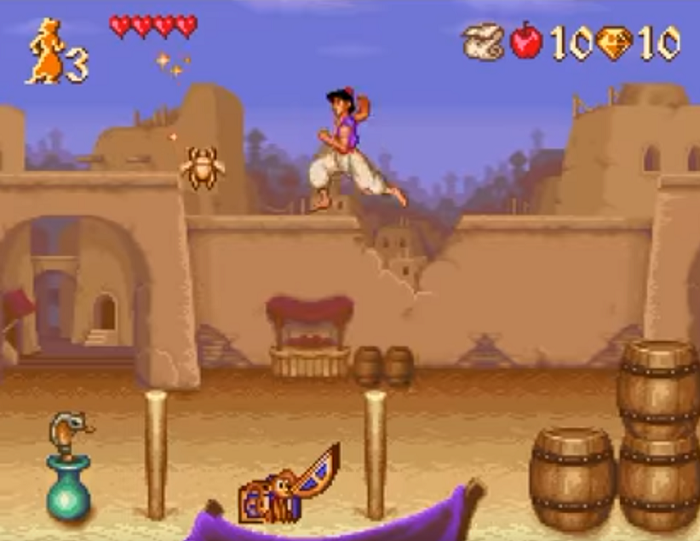 Players play as Aladdin who is the main character in the game and defeat enemies by throwing apples at them or jumping on them. The game has 7 stages with stages 1,6 and 7 involving a boss fight while the rest just involve reaching the end of the level to complete them. To complete the levels successfully, Aladdin must avoid obstacles while collecting gems to get extra lives. A few of the levels in the game have a treasure chest which when collected by a player unlocks a bonus level where a wheel is spun. This allows the Genie to grant them a special bonus or an extra live. 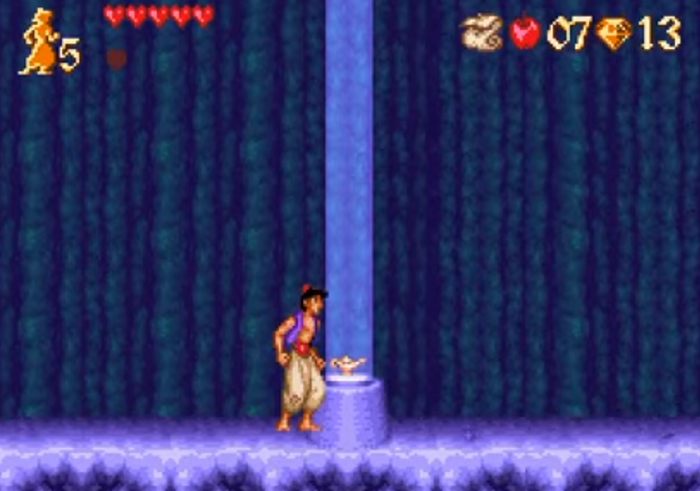 The game’s main villain is the evil sorcerer named Jafar who does all he can to be the next sultan of Agrabah and marry the princess (Jasmine). She falls in love with Aladdin while out in the market place who is later arrested for kidnapping the princess and sentenced to death by Jafar. While captured, Aladdin is freed by an old man (Jafar in disguise) who takes him to the cave of wonders to find a lamp. This lamp has a Genie that grants the owner 3 wishes which Jafar wants to use one of them to make Princess Jasmine marry him.

Things go wrong, the cave collapses and Abu ends up stealing the lamp from Jafar. With the lamp in his possession, Aladdin together with the help of the Genie and his good friend Abu must fight their way through 7 levels and defeat the evil sorcerer Jafar before he uses his evil powers and becomes the next sultan.

Aladdin (SNES) Q and A

Question : What Are The Game Controls For Aladdin?
Answer : Here They Are.

If you plan to play this game it might help to learn the game controls first. If any of these controls for Aladdin are incorrect please let us know by posting a comment below

Question : Is Aladdin Any Good?
Answer : Below is how Aladdin Super Nintendo game rated on popular gaming sites on the internet. This should give you a good idea if the game is worth playing or not.

Question : How Long Does It Take To Complete Aladdin On The SNES?
Answer : If you plan to play this game you will be interested to know how long this game will take to complete and how hard people rate this game. The below stats were taken from howlongtobeat.com

Question : Is It Illegal To Download and Play a ROM of Aladdin ?
Answer : Yes it is illegal.  Nintendo have posted the following on there website “whether you have possession of a Nintendo ROM for a limited amount of time, i.e. 24 hours, it is illegal to download and play a Nintendo ROM from the Internet”  which makes it clear that downloading ROMS is completely illegal.  A lot of people say this is a grey area, Some say as long as you own Aladdin on the SNES you can download and play the ROM as a backup to the physical media, this is not true.  Nintendo see ROMS as a threat to date to the intellectual property rights of video game developers.