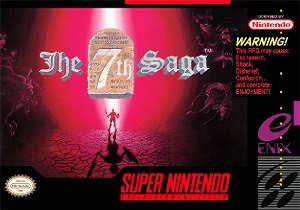 The 7th Saga is an August 1993 Role Playing Game for the Super Nintendo Entertainment System published by Enix. You must choose one of seven playable characters, all of whom separately embark on a quest to locate seven magical runes. 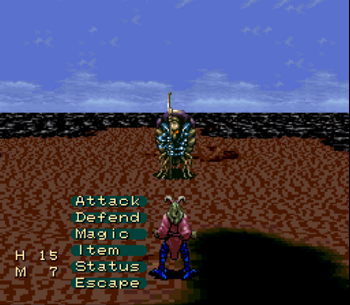 The game is set in a world known as Ticondera where a divine being called Saro defeated an evil entity. This evil entity was called Gorsia and was defeated using the power of the seven runes five thousand years ago. In the years that followed, the runes were spread across the world and Lemele, son of Saro was born a hundred years prior to the start of the game. He eventually becomes the hero by defeating the demon Gariso. Now at 100 years of age, Lemele has become the ruler of the world. The seven characters in the games are recruited from different walks of life across the world by Lemele. After a few years of training, Lemele sends his chosen ones on quest for the seven runes

The player at the start of the game will pick one of seven characters on the quest to find the seven runes meeting the other six characters as the player travels from town to town. The player has a chance to either fight the other characters or team up with them. The game features a map which allows players to see enemies clearly and it is up to the player to decide whether to engage them or avoid combat although this can be very difficult to do. 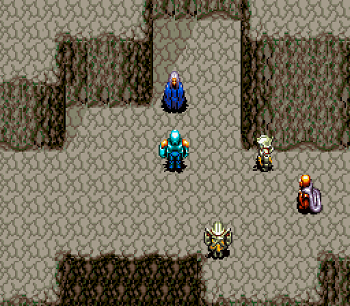 The game has three mode to choose from and these are in-battle, safe area and enemy-infested area. When playing in the safe area which is mostly in a town, the player can freeroam, search for hidden items, talk to other non player characters or rest. The main character can also participate in a duel with the other characters or get them on board in the quest to find the seven runes. When a player chooses to play in an enemy infested area, there will be a magical crystal item that will appear on the top left of the screen.

The crystal that appears will show the player where enemies are, dungeons, runes and cities. A battle erupts if a white dot reaches the center which is the location of the main characters.

When a player chooses to play battle in, the main character will battle enemies taking turns attacking and defending till the other is defeated.

When the player win the battle, they gain experience points, items and goal for their character. Losing the battle will mean the player will lose half of the money they earned.

Question : What Are The Game Controls For 7th Saga?
Answer : Here They Are.

L : Nothing
R : Nothing
A : Open Menu / Enter Command
B : Exit Menu / Cancel Command
X : Nothing
Y : Nothing
Start : Pause
Select : Nothing

If you plan to play this game it might help to learn the game controls first. If any of these controls for 7th Saga are incorrect please let us know by posting a comment below

Question : Is 7th Saga Any Good?
Answer : Below is how 7th Saga Super Nintendo game rated on popular gaming sites on the internet. This should give you a good idea if the game is worth playing or not.

Question : How Long Does It Take To Complete 7th Saga On The SNES?
Answer : If you plan to play this game you will be interested to know how long this game will take to complete and how hard people rate this game. The below stats were taken from howlongtobeat.com

Question : Is It Illegal To Download and Play a ROM of 7th Saga ?
Answer : Yes it is illegal.  Nintendo have posted the following on there website “whether you have possession of a Nintendo ROM for a limited amount of time, i.e. 24 hours, it is illegal to download and play a Nintendo ROM from the Internet”  which makes it clear that downloading ROMS is completely illegal.  A lot of people say this is a grey area, Some say as long as you own 7th Saga on the SNES you can download and play the ROM as a backup to the physical media, this is not true.  Nintendo see ROMS as a threat to date to the intellectual property rights of video game developers.

Question : This Game Is Hard, Do You Have Any Cheats For This Game?
Answer : Yes check out 7th Saga SNES Cheats , For a full list of all the SNES cheats we have Click Here