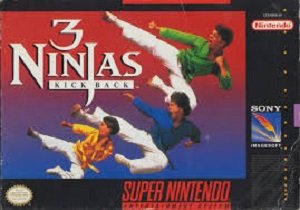 Adapted from the feature film of the same name, 3 Ninjas Kick Back is 2D beat ’em up game released for the Super Nintendo Entertainment System in June 1994. The game is published by Sony Imagesoft and developed by Malibu Interactive. The game received below average reviews from critics with GamePro calling it a “below average platform adventure” with a good soundtrack and sluggish controls 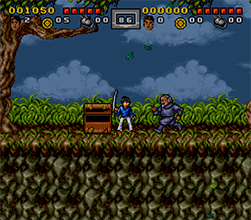 The game is a standard side scrolling platformer where players play as one of three brothers as the main character. Each of the brother has a weapon that is unique to them. Tum-tum the youngest brother has twin sai, Rocky the older has a bo while Colt the middle brother has a katana. The three brothers fight a large variety of enemies which range from wild animals to the rebel ninjas that work for Koga. The goal of this game is to play through all the level till the end and defeating the final boss (Koga). When Koga is defeated, the stolen dagger is returned to the master in Japan.

The master samurai took part in a ninja tournament 15 years ago and won a magical dagger that when put together with an ancient samurai sword had the key to unlock a cave laden with riches. After winning the dagger fair and square, it is stolen from the master samurai by his nemesis Koga. Too old to carry out the search for the dagger, he sends three young ninja brothers, Rocky, Colt and Tum-tum to help him get his dagger back.

Question : What Are The Game Controls For 3 Ninjas Kick Back?
Answer : Here They Are.

If you plan to play this game it might help to learn the game controls first. If any of these controls for 3 Ninjas Kick Back are incorrect please let us know by posting a comment below

Question : How Long Does It Take To Complete 3 Ninjas Kick Back On The SNES?
Answer : If you plan to play this game you will be interested to know how long this game will take to complete and how hard people rate this game. The below stats were taken from howlongtobeat.com

Question : Is It Illegal To Download and Play a ROM of 3 Ninjas Kick Back ?
Answer : Yes it is illegal.  Nintendo have posted the following on there website “whether you have possession of a Nintendo ROM for a limited amount of time, i.e. 24 hours, it is illegal to download and play a Nintendo ROM from the Internet”  which makes it clear that downloading ROMS is completely illegal.  A lot of people say this is a grey area, Some say as long as you own 3 Ninjas Kick Back on the SNES you can download and play the ROM as a backup to the physical media, this is not true.  Nintendo see ROMS as a threat to date to the intellectual property rights of video game developers.